A nephew of ours is training to be a pilot – he works hard in order to pay for flying lessons – because he needs to achieve many flying hours as part of that training.

He began by flying with an experienced pilot – gradually taking over himself – yet still with a professional beside him.

The day came – when for the first time – he took that plane out alone! – he flew – solo ! – how that must have felt. We all felt proud – but I can’t think how proud he must have felt himself.

I recalled – only a few weeks previously – watching the baby birds that had been reared around us – flying – on their own. I didn’t witness that first flight – yet know that many of these baby birds are pushed out of the nest – for that first solo flight. 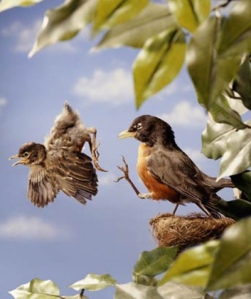 I also recall watching the baby owls last year – as they attempted to fly for the first time – it was scary for us to watch – as one of them struggled so hard to get back to the nest.

I always sense something freeing about flying – the expanse of the sky – the sense of wonder – the different perspective – – at least that’s my impression from my earthbound stance.

In my life of faith I’ve had time when I simply observe – wonder – and even envy those that fly – other times – I have flown myself –  it can be scary – it takes courage.

Oft times we learn to fly in the company of others – yet – nothing beats flying solo – God intends it that way – He longs for us to leave the nest – take the controls – fly towards Him – on our own – there’s nothing more special. 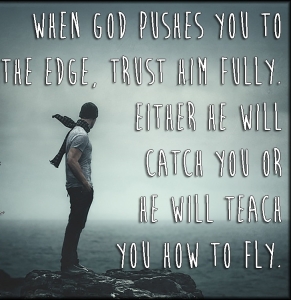 Faith is first and foremost a solo flight – dare to go for it – to learn to fly – maybe in the company of others for a while – but then – take courage – and fly – solo.